How Physics Evangelists Are Ruining Science

Preaching not Teaching the Truth 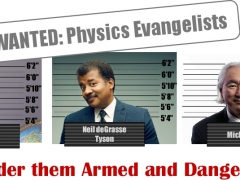 I almost purposely tripped physics evangelist Neil deGrasse Tyson while attending a gala event at the International Documentary Association (IDA). I attended most all the meetings of the IDA for my documentary film “Einstein Wrong“, but this one was special when I found out that Neil was giving a short speech at this particular event being held at the Director’s Guild in Los Angeles. I wanted to look directly into the eyes of the one of my foes. I was sitting next to my wife who was not too thrilled at being there when I remembered that we had passed Neil on the way down to our seats. He was seated strategically in the aisle waiting to be called.

When they called his name, I turned around and saw him coming. It was a perfect opportunity.  It was fairly dark where we were sitting and tripping Tyson was a completely possible scenario given I am tall and my legs often require one foot out in the aisle.

I turned to my wife and said “I’m going to trip him.” She punched me in the arm and said “NO!” She knew very well that I was not only capable, but willing to trip Neil. I whispered to her “they will think it was an innocent accident. Nobody will know but us!” She somehow got me to not do the dirty deed and Neil passed without incident. 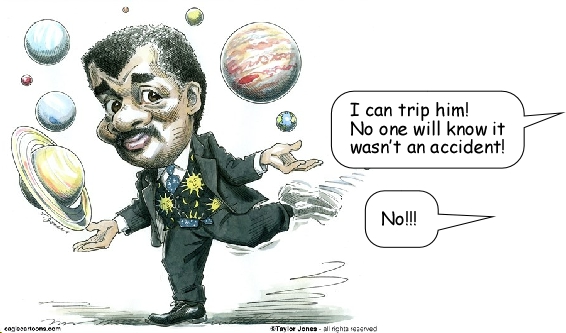 After his speech, the host returned the to podium and said the proverbial line: “How can you follow an astrophysicist!”. The audience laughed and I regretted even more not having tripped him.

Sorry dissidents. I failed at my task.

But the reaction from the host and the easy laugh from the audience from her saying “how do you follow an astrophysicist?” brings up our first problem with these physicists evangelists and physicists themselves.

One of the ways physicists keep themselves in power is the “holier-than-thou”, or more appropriately, “smarter-than-thou” attitude. Basically it goes like this: “Do you have an advanced degree in physics from a prestigious university? No? Then let me try to tell you about how the universe works.”

The idea comes from what Margaret Wertheim, author of “Physics on the Fringe” said about the NPA (now the CNPS) , and I am paraphrasing:

“The members for the NPA love science. They simply aren’t capable of understanding the vast complexities of the universe and modern physics. So they construct their own ‘toy’ theories of the universe to satisfy this love of science but lack of ability. The real problem is we need to work harder at teaching them what we know.”

What these physics evangelist’s, self-appointed (and Ms. Wertheim’s) task is, is to impart a simplified explanation to the masses who are not capable of understanding the deep complexities of the universe.

Heaven forbid if the real problem is that scientific theory is in reality, paradoxical and unintelligible so that it is the theory, not the student that is wrong.

Michio Kaku doesn’t hide the fact: he embraces it. He looks like Einstein. The crazy white hair, the silly photos. Einstein’s crazy hair gave birth to the “mad scientist” and physics evangelists has used this to their advantage as power and as marketing tools. Here is Einstein, alive and well today in the form of Michio Kaku: 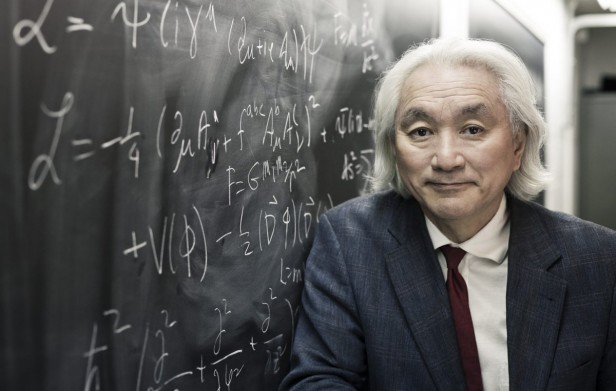 I will give him credit, Michio Kaku at least plays the part to the fullest.

These physics and science evangelists are very similar to Elvis Impersonators. Some are better than others. Each have their strengths. I’ll call them “Einstein Impersonators”. Some look more like Einstein (Michio Kaku), some try to talk profoundly like him (Neil Tyson), and some act like him or at least like a mad scientist like Bill Nye, the science guy, who often dresses the part by wearing a lab coat or nerdy clothes.

It is after all a show. Teaching science is secondary. It is a show that immediately when you see them, hear them, or notice how they are dressed, you will think: GENIUS.

From Filling Theaters to Spots on CNN

Whenever some news from the science world comes out whether a new particle is discovered, or some space news hits the airwaves, the media calls on the physics evangelists. They appear on television giving their “easy explanations” to such esoteric topics as the “Higgs Boson” or something as simple as a planet fly-by as with Pluto.

These physics evangelists are now filling auditoriums almost like rock stars. Neil deGrasse even got his own profile on the grandaddy of them all: 60 minutes in a segment they called “Astrophysicist Neil deGrasse Tyson’s One-Man Mission“. Neil gives talks around the country evangelizing about the “universe” and is even trying to be the next “Carl Sagan” with a new series on the “Cosmos“. 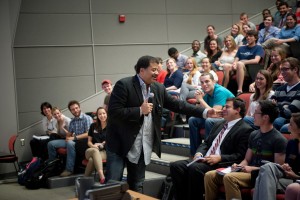 Neil deGrasse entertaining the crowd – not a rock star for his theory, but for his ability to entertain.

But the difference between Carl Sagan and Neil deGrasse is their humbleness. Here is my favorite quote from Carl Sagan that could aptly apply to deGrasse:

“One of the saddest lessons of history is this: If we’ve been bamboozled long enough, we tend to reject any evidence of the bamboozle. The bamboozle has captured us. Once you give a charlatan power over you, you almost never get it back.”  — Carl Sagan

It is ironic that Sagan’s prophetic words can be applied to Neil deGrasse who has by his own initiative, taken up the campaign to called the next Carl Sagan.

What Neil talks about in his auditorium shows is the excitement of science and tries to transmit that to the audience.  But the audiences are full of “social intellects” who they themselves think as being “smarter than their friends”. They follow Neil’s words as religiously as a physics preacher and for any of them to question Einstein, the big bang, or dark matter, is blasphemous and deserves at best ridicule.

Yet, we know relativity, the big bang, and dark matter to be incorrect but this doesn’t stop deGrasse from filling auditoriums of “believers” and never, ever mentioning the fact that these fundamental scientific “facts” may in fact be wrong.

We Get Them All the Time

One of the questions these evangelists hear once in while is “Could Einstein Be Wrong?”. The usually respond something like this:

“You don’t know how many emails I get from people around the world saying they have proved Einstein Wrong or who have a new theory of the universe. I simply don’t have enough time to answer all of them and explain to them where their flaws are.”

There is usually this follow-up observation: “they want to be the next Einstein?”. There is usually laughter, and the physics evangelist says “Yes, they seem to always pick on Einstein. That makes sense since he is the most famous scientist of our time”.

It took me until 2014 to figure out the REASON physicists say that people who want to prove Einstein wrong want to be famous. Psychologists point out that we humans when speculate about other’s motives, we are in reality projecting own desires onto that person.  That is, these physics evangelists or professors or writers are actually projecting their own beliefs onto the dissident scientist and revealing that the biggest motivator for proving someone wrong or coming up with a new theory is not to advance science but something much more valuable:

This means that proving Einstein wrong isn’t a great leap forward to these scientists.  It is what will make them or someone else famous. Fame before scientific discovery.  It’s part of their DNA. Every physicist’s goal is to win a Nobel Prize, even if it is for something that is completely wrong and invented like the neutrino or the Higgs, or dark matter.

Instead of actually reading counter arguments, they simply accept that mainstream science as correct, and no one from the outside or who hasn’t got a degree at a prestigious university can challenge mainstream science.

But wait, wasn’t Einstein a patent clerk?  Ok, but that doesn’t count because the physics evangelists know that Einstein’s “mad scientist” image puts food on the table and in a nerd’s world, that is gold! So don’t bite the hand that feeds you!

Critical Thinking is Not Encouraged Nor Taught

These physics evangelists “impart” their “wisdom” to the masses – masses who cannot understand the complexities of the universe, let alone the theories the “physicists” have come up with. 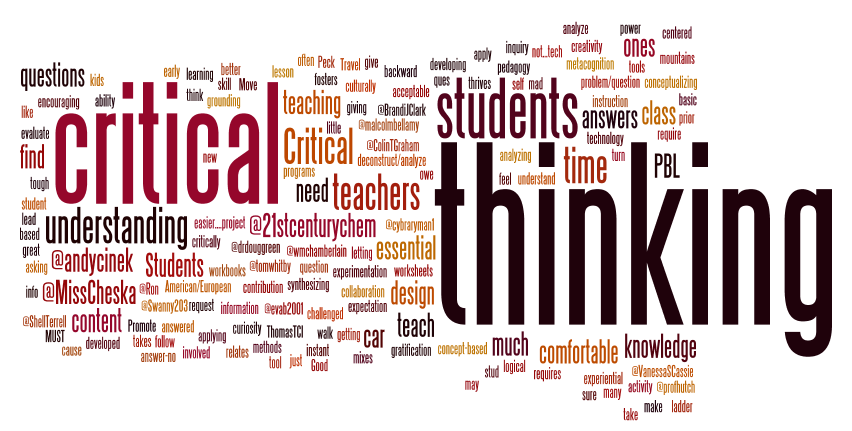 This is the part of this physics evangelist game that is very dangerous, hidden, and subversive, whether these evangelists know this or not. In “teaching” of the universe and its mysteries to the masses, these preachers are in essence telling us what truth is. They do give lip service that this is all theory and could be disputed, but they often say that older theories are not thrown away, but that they are built upon.

But telling someone what is truth, is not teaching critical thinking. It is teaching science as a religion. Religion teaches us what god’s truths are. They are unquestionable. If they are questioned, the person questioning will go on a journey that will lead them back to the truth that they were told in the first place. They are in effect, allowed to take the journey knowing that either they will come to agree with the truth given them, or they will be guided by those who are “enlightened” and they will get to believe the truth they were taught.

That is what science evangelists and science teachers and science professors do today: they teach us the answers. This is the biggest problem we face in science: the failure to teach “critical thinking” or to think and judge things ourselves. That is why all change in science comes from the outside. The insiders teach themselves the truth, only enhancing the truths they know, and guiding the new followers to the correct truths. This guarantees that eventually, mainstream science will get stuck, and that someone from the outside will come along and change it all, religating the mainstream to obscurity.

The outsiders when confronting problems with mainstream science are beholden to no one and are free to think outside the box. The CNPS has hundreds of scientists from around the world who are free to fix paradoxes, bad math, bad language, bad models and create new ones on more solid ground.

These scientists are not children who are incapable of understanding the universe. They are quite capable. Of the almost 3000 scientists catalogued in our database, almost 20% have PHDs.

The CNPS scientists however, possess a quality that mainstream scientists and physics evangelists do not have. The most important skill for doing science: critical thinking, self judgement, and the absence of fear to start completely over from scratch.

All you have to do is look at the word evangelist as I am using it, you will see why these people are not furthering science knowledge to the masses, but are hindering it:

“EVANGELIST: any zealous (enthusiastic) advocate of a cause”

Notice it does not say “teacher” but instead says “advocate” or supporter. Also notice it is advocate of a “cause”.  A cause is:

“CAUSE: a principle, ideal, goal, or movement to which a person or group is dedicated”

Cause is something to support, to spread, to convince others of. It has nothing to do with teaching students how to learn and think and be critical.

But if these physics evangelists where true “science teachers”, the definition should read:

“SCIENCE TEACHER: people who help impart to others, the ability to look at the universe and current theory, and to unbiasedly critique both in order to improve, disprove, or rework current theory and to encourage the creation new theories.”

Now that is a science teacher I would follow!

There should never be physics evangelists. Just science teachers.