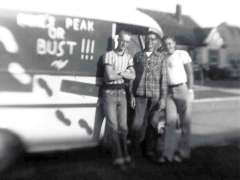 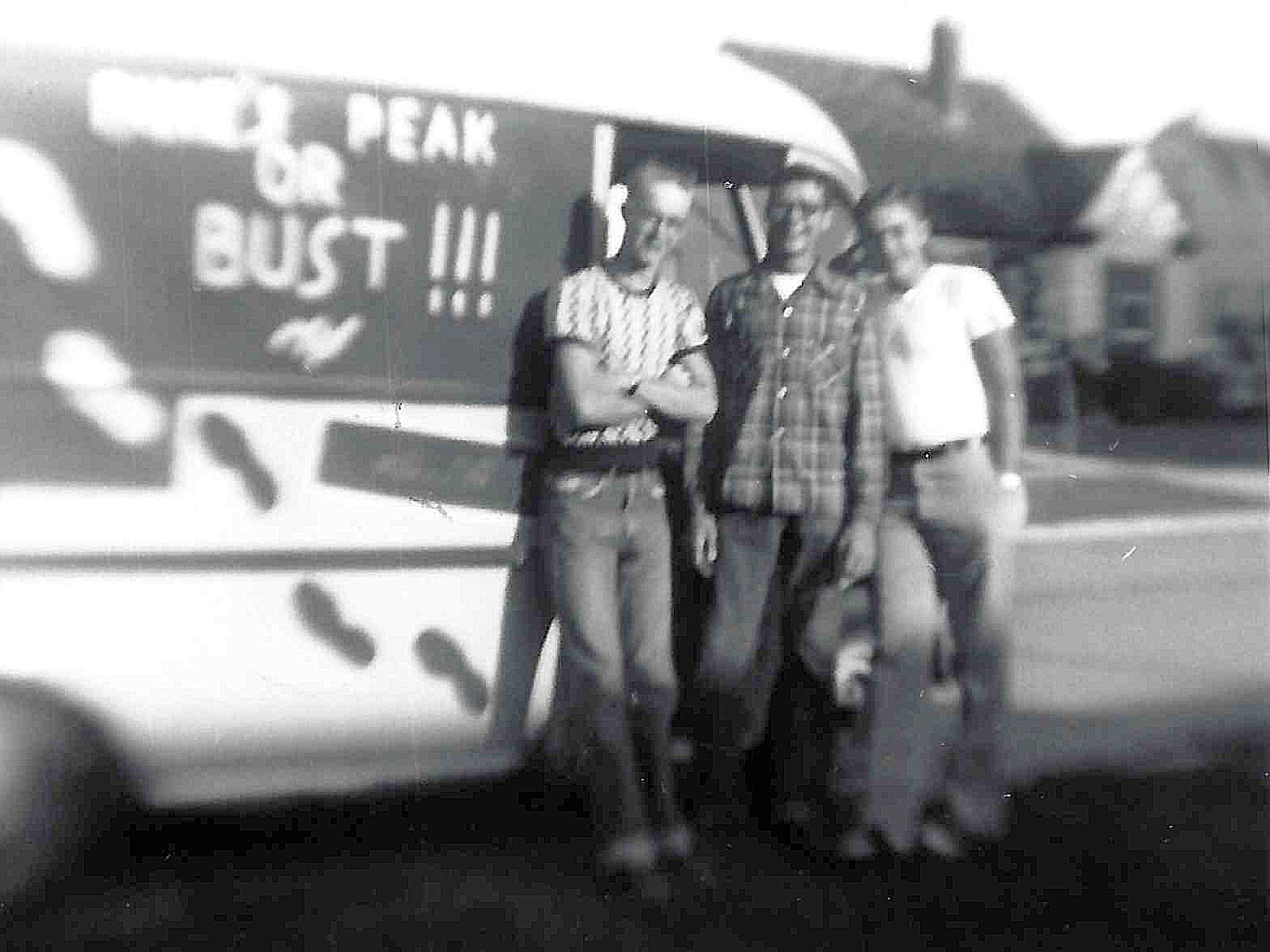 Here is the story of the GONE APE trip west—-to the best of my recollection—-it occurred in the summer of 1954, now nearly sixty-four years ago.

Three high school friends and I decided to take a trip west and do it in a converted “step-van.” This type vehicle is still used by tradesmen and delivery companies like FedEx and UPS. The pictures, a copy of the newspaper article and our train ticket home will follow later in this report.

Their high school adventure made local headlines in Wyndotte Michigan

The van base chassis was a 1946 International and it had seen better days which is likely why we could afford it. It burned oil, so we purchased bulk oil from Sears in 2.5 gallon cans which could be refilled at Sears, which had large containers of oil in their vehicle service areas. Somehow we had the van inspected before our departure and had reasonable assurance that the van could make the trip. Our travel plan included Pike’s Peak, Rocky Mountain National Park, and on to Utah, Yellow Stone National Park, Mount Rushmore and more along the way before returning home six or so weeks later.

Our parents were concerned about our food so we left with lots of canned meals, such as Banquet Chicken and spaghetti and meatballs, etc. We also had a 5-gallon milk can for water and I suppose we used it, but I can’t remember that. Our cooking was to be done on a Coleman gas stove and we also had a Coleman lantern. No one would bother with the latter these days as LED lights are easier to use. We also had some fishing rods and gear, but I don’t think we ever fished.

In the interior we constructed four bunks, two on each side. They were 2 X 4 framed with a lattice of clothes line to support the air mattresses that we slept on. The top bunks were hinged so that there was more headroom during the daytime.

We personalized the outside with our names: Bob H, Alan V, and Bob d. Before we left on the trip and while it was still in the initial stages the fourth boy’s parents thought it was crazy to turn four sixteen-year-olds loose on a trip west and he backed out (or was it he “was backed out”). We also painted footprints on the side and going up over the roof. Somewhere we printed “Hernando’s Hideaway,” which was a popular just released song in 1954. https://en.wikipedia.org/wiki/Hernando%27s_Hideaway   We also painted “GONE APE” somewhere on the van as that was also a popular expression in 1954 and it meant something like going crazy.

Most notable, I think, of our signage and teenage abandon was the message painted on the back doors of the van, “DON’T LAUGH LADY, YOUR GIRL MIGHT BE INSIDE.”  (Daughter, as reported in the newspaper article was too long so we used “girl”)

A lot of the trip was not too interesting. Once past Chicago, most of Illinois, Iowa, Nebraska and the eastern part of Colorado are pretty boring. I do remember asking a farmer for directions and he responded, “Follow my property for two-miles and turn left.” Since we all lived on 40′ lots driving two miles along someone’s property seemed amazing. We slept in some unusual places including school yards with outhouses. 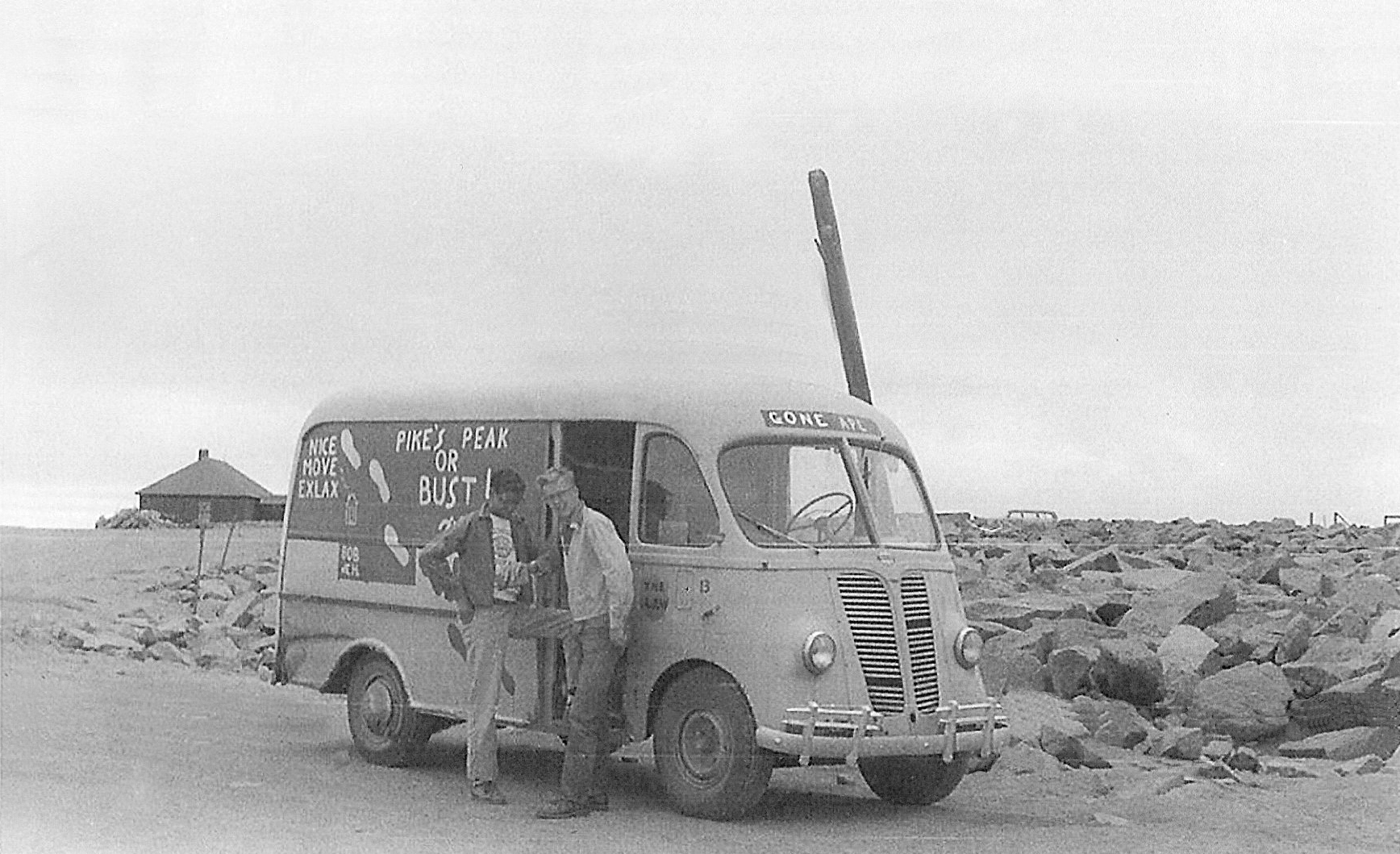 On top of Pike’s Peak. I took the photo. Note how barren it is. There is more there now, but the air got thinner or, alternatively, I got older. Alan Vasher and Bob deHilster

At last the Rockies loomed on the horizon and we got to Colorado Springs and Pike’s Peak. The road to the top was not paved all the way in 1954. For some reason that now escapes me, I drove the van up and down Pike’s Peak. I have been to the top two or three times in the intervening years and there is a lot more there now than in 1954. Oxygen seems to be in shorter supply now than sixty-four years ago.

I remember stopping in a store and the three of us having a conversation with the clerk, a woman old enough to be our mother. She advised us to be careful about climbing the mountains and said that her son had attempted to climb Long’s Peak and did not return—-ever.

Eventually we made our way to the east entrance of Rocky Mountain National Park, just beyond Estes Park and spent a few days in the campground. I can’t remember where, but we took a horseback ride in the mountains, Alan was more into horses than the other Bob and I were. We also did some climbing and I remember getting up quite high and looking down on our campground. Many years later in 1976 I imagined we were in the same area and Uncles Scot and Paul and I climbed in the same area. We did not get up to where I remember we were in 1954. Somehow the mountain got higher and steeper.

Somewhere along the way our battery got weaker and we started parking on hills so that we could release the brake, coast and engage the clutch to start the engine. A knowledgeable adult suggested we check the water in the battery. BINGO, we added water and the battery once again started doing its job.

Onward and westward, we were on our way. The road was the Trail Ridge Parkway and it goes up and up and still up more to crest at 12,183 feet elevation. Our van struggled a bit and I sort of remember adding water to the radiator. Driving slowly up hill, with all of that signage, did invite some stares from passing motorists.

Going downhill was easier. Alan was driving as we approached Steamboat Springs and in a place we had never heard of, Rabbit Ears Pass, the road turned and we almost didn’t. Vans are VERY top heavy and “stability control” had not been invented. To the left was a STEEP drop off, without guard rails, and to the right was a TALL mountain. We turned over and landed on the right side of the van and more or less in the middle of the road. 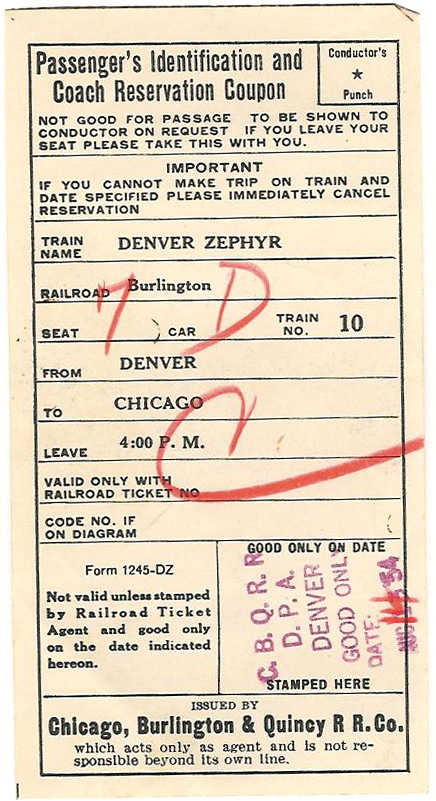 One of the tickets that got us home

The van had a split windshield and the right panel fell out and I did too–unhurt, but a little dazed by the event, not a bop on the head. I remember thinking about those 2.5 gallon oil cans that we had filled with gasoline in case we ran low. I moved away about 40′ and called back to my friends, “Are you okay?” Both were fine; none of us had any cuts or bruises. WOW, talk about a miracle.

The police came and called for a wrecker which turned the van back on its wheels. It was barely derivable; the brakes were shot, the right windshield was missing, the sliding doors did not slide, etc. We limped the van down to Steamboat Springs and sold it and all of the contents to the railroad station master. With the proceeds and our available cash we were able to purchase train tickets back to Detroit via Denver and Chicago. I don’t remember when or how, but we got word to our parents and they met us at the train station in Detroit. I imagine that they were surprised to see us walking uninjured. It was a miracle.

I have been through Rabbit Ears Pass many times in recent years and have never been able to see where we crashed though to two tall rocks, Rabbit Ears, to the east of the road are visible. Ten or so years ago we attended a destination wedding in Keystone and as we had time to kill we drove to Steamboat. The railroad station was and still is an artsy type store. I inquired about the junk yard and went there to see if I could find the old GONE APE. The guy at the junk yard looked as though I was nuts and suggested that if the van was anywhere it would be in a river bank for erosion control.

That’s the story as I remember it.  Likely wrong in some places, but more or less correct.  I hope this answers your question and good luck to your friend.