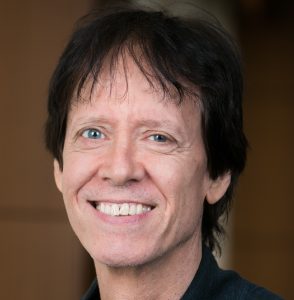 David de Hilster, born November 13, 1959 in Ann Arbor, Michigan, is a computer scientist in the area of Natural Language Processing (NLP), a sub-field of Artificial Intelligence (AI). David was raised in Ohio and received a Bachelor of Science in Mathematics, a minor in Architecture, and a Master of Art in Linguistics from the Ohio State University. He is also an accomplished artist.

During his graduate years at the university, David interned at the AI group of Battelle Memorial Institute in Columbus, Ohio, where he was later hired. In 1987, David moved to Rio de Janeiro, Brazil, where he continued working in NLP and married wife Doris. David and Doris returned to the United States, where David worked at the Artificial Intelligence Lab at McDonnell Douglas in Huntington Beach, California, and where he met his lifelong colleague and friend, Amnon Meyers. David and Amnon also worked in NLP research at TRW Space Park, Manhattan Beach, California, in the 1990s. During that time, David was supported by the Los Angeles County Museum of Art, where he sold and rented his art creations to collectors.

David built software systems at various companies, most notably developing NLP\index{NLP} technology for Text Analysis International Inc from 1999 to 2018 with Amnon Meyers. In 1999-2001, David and Amnon\index{Meyers, Amnon} invented a computer programming language called NLP++ as well as a programmer’s development environment called VisualText. These have been used by companies including IBM, NASDAQ, and Educational Testing Service, spanning industries such as medical, real estate, scientific, legal, and financial.

In 1992, David met Argentine physicist Dr. Ricardo Carezani who, in the 1940s, demonstrated fatal flaws in Einstein’s theories of Relativity. In 1996, David presented a paper about Carezani’s work at the Natural Philosophy Alliance, where he met NPA founder John Chappell, and worked with other dissident scientists. In the years 2005 to 2014, David elaborated the documentary film “Einstein Wrong – The Miracle Year”, exploiting the work of NPA scientists. During the filming, David became deeply involved with the NPA, helping to create a new website, organize annual conferences, and establish the largest online database and wiki of dissident science work in the world. During this time, David met and studied the work of prominent scientists, which helped lay the groundwork for the Particle Model.

In 2015, the NPA became the John Chappell Natural Philosophy Society and David was elected president, establishing the online magazine Beyond Mainstream Science as well as the beginnings of an online University for natural philosophy. In 2015, inspired by his father’s model for gravity and light, David proposed that the photon, electron, graviton, and particles comprising magnetic fields were all one and the same, following which the two launched this book. In 2017, David started his Dissident Science YouTube channel.

In 2014, David moved to Boca Raton Florida with wife Doris and daughter Luanda, where he currently works at LexisNexis in the supercomputing department.